Torque: The Long Arc of Re-Entry 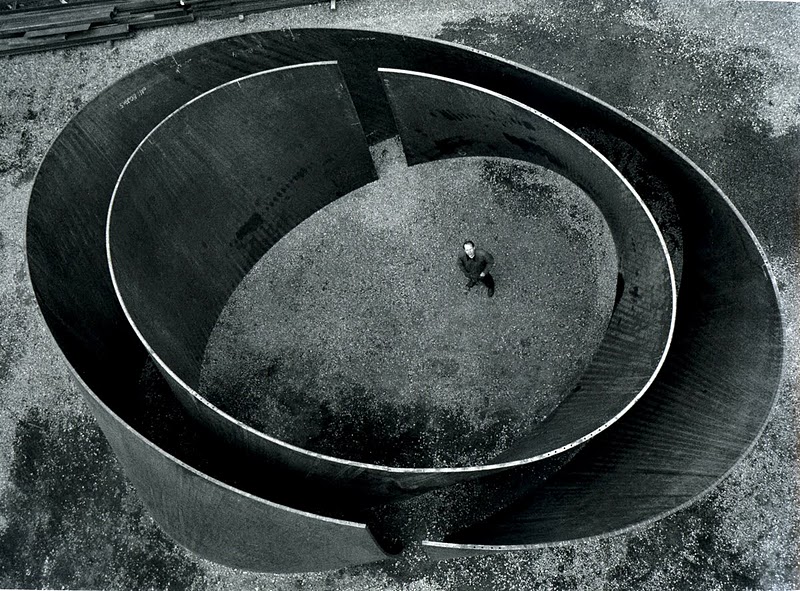 Somewhere in the beginnings of my adult thinking about circle work, I had to acknowledge that I am my father’s daughter.

My father graduated college with a degree in mathematics and spent his working life as a postman, a life of numbers and sequences he found more personable and physically active than the finance opportunities he was offered. At home, we enjoyed sports and math hand-in-hand. Math was presented to us as part of the knowable world, through the kinetics of lining up a pool shot, in the arcs of bicycle wheels over ball courts, through calculating the probabilities of our teams to advance in tournaments.

When I left home at 17 to attend college I left math behind. Mostly. Yet, sitting in circle I often see diagrams mapping out in my mind, the geometry of our community. The dialogue, intentions, and unspoken energies that emerge as we gather together can be drawn as moving axes (plural of axis, not weapons) between our positions. Someone pulls or pushes, speaks or does not, and the whole circle shifts. Intuitively, even unconsciously, I chart diagrams in my head of what I sense, lines of pulse, of color, heat. The shapes are never circles. Even with the strongest center, the most beautifully hosted shape, there are pluralities at the starting seed. These only multiply, even when they are able to find harmony. 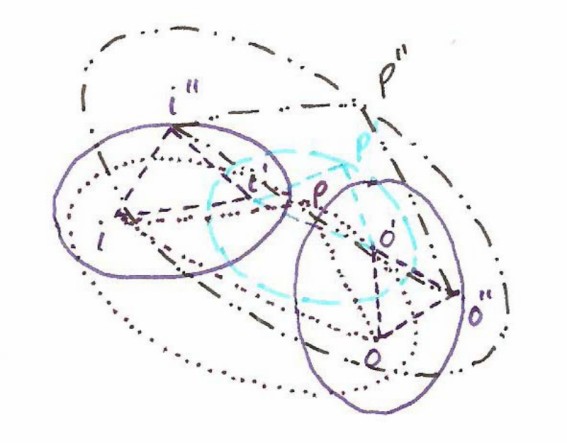 We therefore meet, I believe, always in ellipses. We meet in wobbly orbits, in layer upon layer of invisible relationships. If we are honest, we know the multiple centers, the varied foci, which claim our
attentions. Sometimes we might sense the other foci that pull our
friends’. As we work with ourselves, with each other, we learn to
discern what ellipses from which we most want to work, from which to
offer, what ellipses we are willing to name.

“Our Ellipses” is the name I chose to work under. It is probably not the best name in terms of clarity and recognition, but it reminds me of the attention from which I want to practice.

What an immense gift then to find myself, the day after the Art of Humans Being retreat, at the Dia: Beacon in the presence of so huge and so weighty a manifestation of these qualities of ellipses. Though I knew of Richard Serra - Tilted Arc is a standard in 20th century Humanities textbooks, and a wonderful story of willing to be disturbed – I cannot claim to have consciously orchestrated such a meaningful re-entry experience. 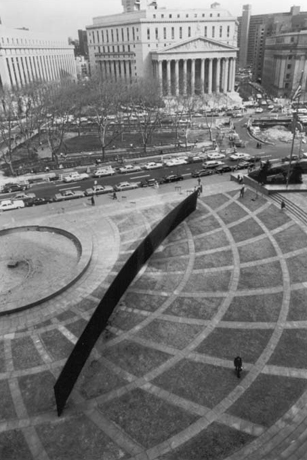 As part of my travel plans to the Art of Humans Being, the first of three retreats this summer offers me, I had resolved to visit the Dia: Beacon in New York between stops. The Dia is a cousin of The Menil Collection, a beautiful museum I had the privilege to partner with in my work in Houston. Many mornings my writer friends and I would meet in the quiet of The Menil to design learning experiences in art, writing, and conversation for children visiting the space. The Menil’s approach to art education is quietly self-organizing, and is one of the few, if not the main, space that I miss from my years in Houston. 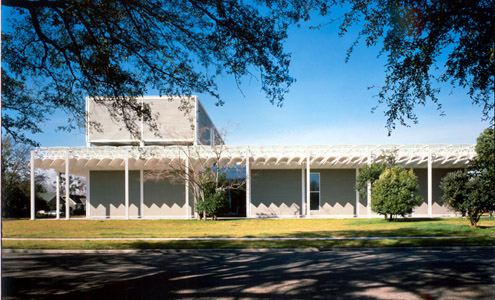 View of the back of The Menil Collection from neighborhood bungalow
Photo Credit: Haynes-Whaley
http://www.hayneswhaley.com/project.aspx?t=10&id=81092&i=2

The museum was built in a neighborhood of craftsman bungalows and sees itself as a neighbor. Entrance is always free. Other area nonprofits, including several I worked for and with -- Writers in the Schools, Inprint, DaCamera -- office out of bungalows that surround the museum. The museum was designed by Renzo Piano, the same architect who designed the Menil family’s Houston home. Inside, there are no placards “explaining” the art. The walls are not over-populated with canvases. One or two paintings rest easily on a wall they way they would in a home. That poets and writers, not traditional art educators, have historically been the guides on these tours for local children speaks to the welcoming, co-creative heart of The Menil’s design.

The Dia always existed in my mind as The Menil’s upstate cousin, founded by one of The Menil’s founder’s daughters. The collections feature the work of many of the same modern and contemporary artists. Though less overtly communal, the Dia has been deeply thoughtful about place, renovating beautifully and carefully an old Nabisco box-printing factory to house their collection. It sits softly along the railroad tracks that follow the east bank of the Hudson River.

One wing of the Dia, a sweeping, crisp warehouse-type space, is home to four of Richard Serra’s torqued steel sculptures, three of the early series, including Double Torqued Ellipse (pictured at the top of this post) and 2000 (a torqued steel spiral). The sculptures fill the wing, rising near the exposed rafters. The floor is a modestly polished, raw concrete. The noise of the Hudson line is clear and present when the trains pass. 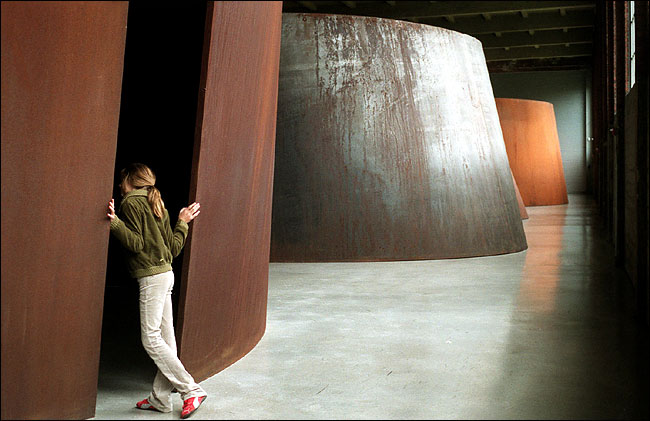 Woman peers into one of Serra's Torqued Ellipse sculptures at Dia: Beacon

Yet, there is something sacred and soulful about the space. The quality of intention, not only in Serra's work, but the building, the arrangement of the sculptures in the wing, the quality of light (the windows of the factory were preserved though subtly modified by artist Robert Irwin), the attention with which the visitors in the gallery walk, the well-honed balance of welcoming and guardianship the museum security staff holds. Being in that space reminds me of the height of resonance human beings may create together, loosely, in urban settings, with divergent lives. 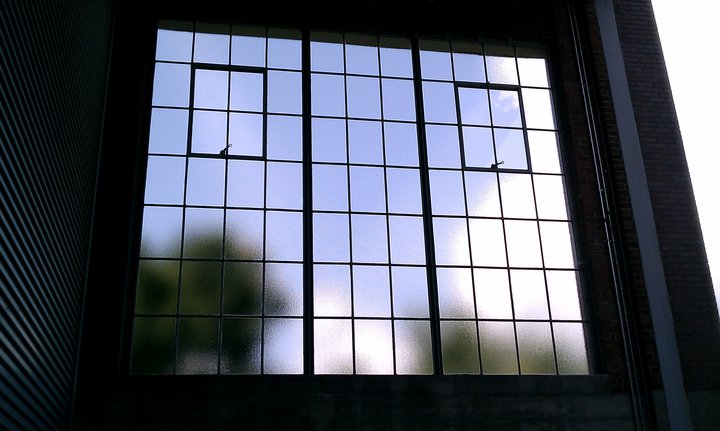 Walking inside the torqued ellipses, I experienced an encompassing feeling of being held, though no one knew where I was, though I could pass hours seated on the concrete floor inside the folds of the steel without exchanging a word with another human being. There is an insight of scale.

Serra's work became possible not only because of his imagination and his attention to space and movement, but also in convergence with new technologies in steel production. I often like to think of the Art of Hosting methods as "new human technologies."

My brother went on to earn a Ph.D. in Physics and Engineering, specializing in nano-fabrication. Suffice it to say, he could give a better definition of torque than I might. I do
know that torque is also referred to as "moment," as in the moment of
force is what constitutes torque.

Might we not think of the moments we are in circle together as torqued ellipses?

Next stop... two centers for dance, the historic Jacob's Pillow and the emerging Earthdance, where I am sure I will be in many moments, feeling much torque.

Comment by Peggy Wolfe Dunn on August 11, 2010 at 10:33pm
fascinating - the combination of thoughts expressed in words and images photographed and sketched is a delightful exploration of experience - thanks for sharing this -