Why was this Deep Democracy training within the Hub Summer School calling me to Rotterdam?
Deep Democracy has been on my radar since I joined Pioneers of Change approx. 5 years ago. When Myrna Lewis offered to host a training in Hub Berlin a few months back, there were not enough participants to make the training happen.
During this summer, the Hub Summer School has hooked me to go to Hub Amsterdam and Rotterdam during the summer.
A wedding of a Hub initiator in August in the the Netherlands and the personal invitation of Moraan brought me there. And I stayed another week after the wedding to attend the Deep Democracy introductory training at Hub Rotterdam. And the night before the course, I become aware that my personal burning question had been calling me to attend: how can we become more democratic?
The failure of our current democractic system has supported the emergence of Deep Democracy practiced by Myrna and Greg Lewis for many years in South Africa:
"A failure of majority democracy is that it discounts the human factor. It suggests that if you are passionate about a view, but have lost the vote, you will be very adult and mature in your loss, will give up your passion and go along with the majority. Human nature has the exact opposite reaction. If people are passionate about their view and have lost the vote they will tend to initially feel hurt, rejected, disowned and disconnected from the majority. They will initially subtly sabotage the majority decision but, if unsuccessful over time, their sabotage will become more overt and could ultimately become violent.
Deep democracy is a step beyond majority democracy due to this flaw of majority
democracy. It recognises the human factor. It has a facilitated five step process which at the simplest level enables the decision making process in groups, ensures buy-in and lessens the likelihood of sabotage to the decision. At a more sophisticated level the method helps resolve the deeper conflicts which have been created by past poor decision making processes where the sabotage has become clear and is preventing progress." (Source)
See also this blog post and comment 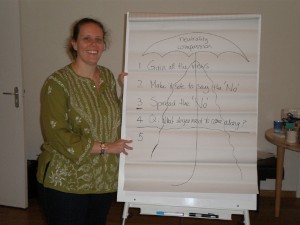