As Maria wrote in an email a day ago: “I am in Athens right now - and the disintegration of the old system is really strong - everything is coming to a standstill here - garbage is not being collected, general strikes about two days a week on average, kids are striking and not going to school because books are not available for them, more and more people begging and knocking on doors saying they are hungry, 175,000 households have had their electricity cut off a month ago and 60,000 are still cut off.  We now have a 10 day petrol strike - so movement might just cease all together.”

At the same time, people are turning to one another and sharing what they are experiencing, practicing, dreaming – in pursuit of discovering ways to respond and engage in profoundly new ways.

This weekend we hosted our first ‘friends and family’ circle at Maria’s family home in Athens – called by Maria, Maria Bakari, with Anthi, Odysseas and myself – inviting people we knew and people we had only heard of, but had been connected to via other relationships.  We were 22 in all – and with us were Newness, Possibility, Despair & Parea (good company!).  It was a powerful evening of sharing and being in community – with food prepared by Maria’s sisters’ Anna and Stella and our circle witnessed by Kosta and Yianni on the balcony – with the Circle being the difference from most evening gatherings such as this.  It strengthened the connection within and between us and called forth Courage – planting the seed that this way of being was important and must continue.  The next conversation already has a new home to be hosted in – filoxenia – hospitality at the core of the Greek spirit.

Days later, we were in our car, waiting in a petrol queue for over an hour, as the 10 day strike takes hold.  Maria Bakari, Maria and I witnessed the systemic challenges of these times – and the responses that unfold – somehow balancing the edge with beauty….

An elderly woman walks slowly to get her medication, and on her return – tries to navigate past a car parked on the sidewalk.  She balances precariously on the edge of the pathway, until Maria runs across and assists - holding her arm for perhaps 10 seconds, protecting her steps - rather than see her fall into the road as cars whip past at speed.

Next, uncontrollable Anger rises in numerous people as they challenge Injustice with people not waiting in line – accusations flying that the others are just like the government.

Next, a pregnant woman yells at the garage attendants, that her child has wet themselves in the car, having waited in line for 2 hours – and she, incensed that the attendants are not stewarding the process of vehicles entering the forecourt in right timing.

Next, a man pushes in the queue, saying he is ‘local’ to this garage – not appreciating that he too has to wait his turn, rather than assume the ‘right’ for business as usual.  Maria steps forward again and stands patiently in front of his car, gesturing that he move back and wait his turn and the car next in line move forward – always with a smile.  He backs off and leaves.

Next, we prepare to leave after being served with petrol – by a non-Greek attendant – engaging in interested us in conversation about where we are from.  We then realise our car won’t drive properly.  Thankfully reaching Maria’s family home, we receive the mechanics verdict from Maria’s cousin that the clutch has broken and we cannot drive home to Axladitsa.

Calling council in the street, we see if we should leave immediately to catch the last bus of the evening, and Maria B travel home to Rhodes – realising our time in the petrol queue has made this impossible, and not supported by Right Timing.  So we decide to stay another night.  We embrace the opportunity to make sense of what has unfolded, inner and outer...as the edge becomes manifest in its wide-reaching, multiple ways.

We circle up – Maria, Maria and I – and call in Vanessa, who is at Axladitsa – and pass the talking piece, whilst sipping wine and eating éclairs from the gathering.  We speak of witnessing the disintegration and well as the newness arising from the edges of reality.  We recollected iconic images of vulnerability in the young and old - men and women – local and non-local; as well as the images of power over, power with – and the powerless: real and mechanical – the edge of resources and the edginess of sharing amidst the tension of scarcity; the gift of family relationship and the gift of a stranger – the gift of right timing and the gift of synchronicity.

I relate a blog Re-patterning: A Gift from the Edge that is part of my book – that just yesterday I was editing…about the petrol strike from 2010 – and offer these excerpts into the circle:

“…And yet, deep within us and this land, we all knew that the re-patterning must continue. The need to re-pattern at a fundamental level was here, now. Somehow, and I had always known this - this little place in Greece on the furthest edge of Europe and on the edge of the Eastern Mediterranean and Middle East, with it’s relatively low infrastructure ground pattern was a fundamental reason of why we had come here.  We were off the local and institutionally resourced water grid, electricity grid, and even monetary grid. We were even under the orthodox radar of what was viewed as the ‘systemic shift-work leading edge’ – and yet, here we were, somehow forging a groove into the leading edge of shifting perceptions, mindsets, realities, practices, infrastructure, leadership, mastery…world-view….”

“…We simply could not wait for the pressure to rise again in our micro-cosmic system – that seemed to be a clear pointer to the pre-wave of something much broader, deeper and more long term, both here and elsewhere. We could not wait for the fallout of another crisis to it usher in the tension of creating re–pattern and flow between Source and Service…”

And later, as we sat together – the three of us – in the family home, we connect with the world via email, Facebook and Internet – sharing insights, jokes, quotes between us…and for me, a compilation – without knowing why, until a day later - images of beauty at the edge from the Southern Pelion Coastline - my own way of balancing the precariousness that exists here and in many places around the world. 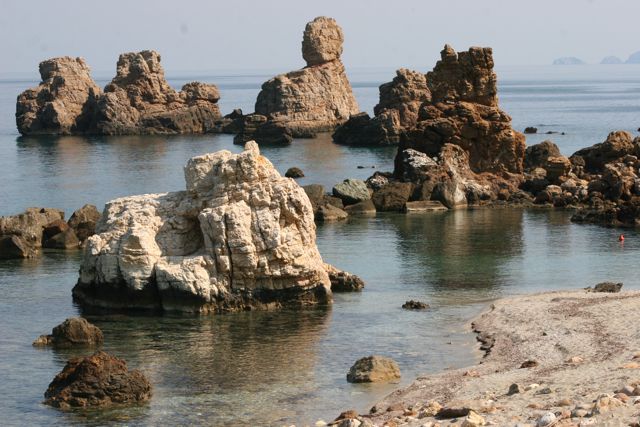 In these few, yet power-full days in Athens, we witnessed the power of the edge evolving in its many forms – and the power and beauty that is inherent.  Crucially, we were able to see it, and call it forth if not present.  Crucially too, we sensed the edge of ebb and flow, rise and fall, chaos and order - and cultivated the consciousness and presence to ride the waves with Ease and Grace and other times, Overwhelm and Confusion –all offering insight and meaning.

And as we travelled home on the bus, I remembered the Article I wrote for the Powers of Place, Perspectives: Power of the Evolutionary Edge:

“If you want to understand the power of the evolutionary edge, simply recall the fragility of a stalactite catching the newness of a droplet forming at its tip, having journeyed from ground level - through moss, stone, soil, rock itself – a miraculous slow-motion subterranean journey taking months, years or even thousands of years to create. Equally, recount the violent yawning of the earth’s shifting powers, creating mass destruction, violent tremors and immense tidal waves sweeping through the fineness of human creation, balanced precariously on the shoreline.

The edge is a place of power and potential – that evolves with tremendous potency.

But, what of the edge? What powers do edges hold, particularly as we attempt to navigate these times of unprecedented change? What gifts of wisdom do they offer with respect to our own nature – and our own need to intentionally evolve?”

We are living and learning this…real time…