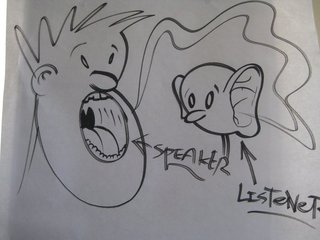 Yesterday I was involved in planning and facilitating a youth forum in Newcastle (Australia) that drew on Art of Hosting. We decided to keep the pace pretty quick (some people would say very quick) and still encouraged some interesting conversations. There were around 40 young people (aged 15-25) from some local schools and a few youth service, as well as 10-12 people aged over 25,

After welcomes, introductions etc, we had a mini world cafe. We had two rounds of "What time is it in Newcastle" and then a round each of "What makes Newcastle unique" and "What else could Newcastle be". Each round was only 5 minutes, but it seemed to go well. I think it would have been good to have some more rounds (particularly of the second two questions).

We hosted an open space immediately after the world cafe on "What idea would you like to work on right NOW?" Once again, the pace was fast and we had two sessions each 15 minutes long. We had a total of 11 topics around a range of ideas including making Newcastle safer, homeless youth, legal graffiti spaces, and promoting the realisation the strangers are not always enemies.

After lunch there were a range of ways in which participants could explore express some of the ideas creatively (e.g., through street poetry, a zine, music or video).

A few things seemed to work well. We used youth facilitators for much of it, with me acting as a bit of a coach and providing an overview about some of the processes. The youth facilitators were studying youth work and I met with them for a couple of hours the week before to discuss how the day would run and to get some feedback from them. On the day, I had developed a fairly detailed running sheet to help them. As well as participating in the forum, six of them facilitated parts of the forum and another six or so used their awareness of the process and aims of the forum to assist in ensuring the conversations at the tables were inclusive and relevant. The youth facilitators showed that youth voices were important and listened to, and hopefully encourage other participants to reflect about how they could use some of the processes. More experienced facilitators might have been able to explain things more clearly or encourage greater discussion, but overall I think the positives of using young people was worth while.

We were quite often worked in a circle and so had two scribes on either side of the circle so everyone could see the flip chart and also had two cartoonists capturing some of the ideas in drawings.

One problem was that there were too many adults, especially some who stood around the edges so were observers rather than participants. Ideally we would have mainly like youth participants with a few adults who were actually helping with the forum.

We also set up a FaceBook site and hoped that people might use the site more through the day. I don't think it really worked, but it did create a sense of excitement and currency that enhanced the atmosphere at the forum. We hope we will get more comments in the coming days and the forum organisers will be putting more information as it becomes available.

I've only recently completed some Art of Hosting Training, and would probably do some things differently, but overall it went really well, the organisers were happy with the outcomes, and the young people seemed quite engaged.

One of the teachers commented that she had not seen some of her students engaged as much for a long time.

Permalink Reply by Ria Baeck on September 2, 2010 at 3:13am
Great sharing Graeme! and great ideas in your design. Keep this kind of stories coming, there is huge learnings for others in it!

Permalink Reply by Ursula Hillbrand on September 27, 2010 at 6:36pm
This is great sharing, Graeme. What you say about the adults standing around: I had a similar experience when I hosted a world cafe with 150 high school students at my former school during the back to school initiative in Austria last year. Some teachers just wanted to stay and in their way, not even aware of it, dominate. I quite friendly but firmly told them that if they wanted to stay, they were welcome to participate, but we had no standing places. And they all magically left! The one who had the "official" role as photographer, became a participant, and the headmaster was offered a "VIP" seat, and a young person volunteered to host his table. He also soon left the scene, and the students were quite happy to be among themselves. I think this all happened, because we gave it some thought before, concerns that came from the "young" callers that were attended to.
However it sounds that your outcome is pretty good, that all are happy. And now you also have the learning you have. A true gain.

I am interested to learn more of experiences how to include young people, and even children, into participatory events. They already have so much unspoiled wisdom, and can access it easily. And on top of this, we want to learn how to include them for the sake of inclusion, and at the same time show them that there is a more holistic way.

I feel there is a learning edge for us when we attend to the highest potential of the youngest in the room.

Permalink Reply by Graeme Stuart on September 27, 2010 at 7:50pm
Hi Ursula
Thanks for your comments. I think I need to learn to be more assertive and become better at telling people when they are being unhelpful. I'm not sure if I wanted them to participate, we wanted to hear from the youth. We did have a person who was going to take some of the teachers off during the forum (but he was sick and we didn't think to give his role to somebody else).
I think these types of participatory events are great ways to involve youth and children. I think the use of art has real potential too.

Permalink Reply by Mary Alice Arthur on September 28, 2010 at 2:38am
Graeme, great to hear you are putting the work into action and bringing so many young people into the team! I'm sure that was a great learning for everyone. Now, as you look back, how did such short rounds work? What were the positives of short discussion (5 min) and what would have happened if you doubled the round (10 min)? What can our community learn from the pace you decided on?

Permalink Reply by Tami Farber on October 11, 2010 at 2:09pm
Graeme,
This is so exciting and I would love to talk to you more about all the work I am doing with Youth in NYC. I am hoping to conduct an art of hosting with a group of students at a school I work with to engage them in dialogue around their vision for their educational experience and being part of the leadership to make it happen.

Hi Graeme. This is great learning, well done! I feel there is so much potential when facilitating groups of young students. They may well be more open to different styles of conversations than the adults who haven't been used to this!

RE: on the role of adults. I don't have direct experience in this kind of dynamics. I can only think that Ursula's point is very relevant: adults who are in teaching roles may try to dominate, even unknowingly. It takes a great deal of courage to step out of their "teachers" roles and step into the co-learner role.

A couple of thoughts: one would be to brief them beforehand and be very clear on their role during the workshop. A nice idea for changing roles - this was applied by transition towns in a meeting in London, UK. Invite them as "key listeners". No "key speaker today", only some VIP listeners. And they will only listen : )

Alice, I think the advantage of keeping the discussion short was that it created quite a sense of energy and participants didn't get bored! The down side is that the discussion didn't go as deep as it might have. Dee (one of my colleagues) and I are both ex youth workers, have short attention spans and like a fast pace. So we quite often have fairly short discussions with frequent movement. We like the pace and think it encourages people to bounce ideas around, but recognise that some people would find it too. I should add that at times we do spend much longer and will give people 20 to 30 minutes so they can go deeper.  I guess as with so many of these things it depends on you purpose and audience. I find that people can often have quite interesting discussion in a short time, but the danger is it becomes more like a brainstorm.

Sometimes we move small groups around every 5-7 minutes as a group. All tables have the same question and they move 4 or 5 times to a new sheet and get some input from previous groups. I find that it starts a bit like a brainstorm and then they start looking at the comments made by other people on the flip chart and start connecting ideas and thinking in more depth. This has been working quite well in some workshops we have been doing with a national organisation that is adopting a greater focus on Asset Based Community Development (ABCD). We have been asking them to think about the implications of ABCD for their work and by moving fairly often, we they don't get bogged down in potential negativity and they seem to start thinking of a range of ways they can implement ABCD.  We then follow it up with a longer period of discussion on specific ideas using open space.

Tami, we did have youth involved in planning - but mainly over 18s. I think it could work well with younger students too.  Dee recently did an open space session with students who attended an ABCD conference in Newcastle. Apparently it went very well. I do think these processes are great with youth. It would be interesting to hear more about your work in NYC (which I presume is New York City?)

Marco, I like the idea of key listeners.  Our original plan was that another adult was going to meet with the teachers during the forum and engage them in some meaningful conversation. Unfortunately, he was sick and we didn't organise for somebody else to do it.  I suspect the VIP listeners idea could have worked better.